What Kind of House Can You Build for Me? Biro, Benin 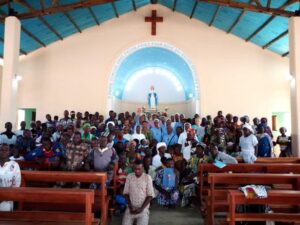 King David longed to build a ‘house’ for the Lord in Jerusalem. God inquired of David, “What kind of house can you build for me?” As the spiritual leaders of the Parish of St. John the Baptist in Biro, Benin, the missioners posed the question about God’s dwelling since their arrival. They were in a unique position to respond to God’s desire to dwell among his people. It took years of preparation to answer the question of an actual building for God’s dwelling. They first confirmed the presence of God in the people themselves by love, instruction, care for the poor, primary education, and worship.

Eventually the missioners responded to growing numbers of faithful by constructing a new parish church. The Parish of Saint John the Baptist in Biro, Benin, was established in 2002 and is part of the Diocese of N’Dali. The Congregation of the Mission began its new mission in Benin in 2012 at the request of the bishop of the Diocese of N’Dali. The addition of the Vincentian priests relieved a serious shortage of priests, restoring priestly ministry at the Parish of Saint Jean Baptiste, which contains 16 village communities.

In a short span of five years, the number of members is projected to double to 650. The parish used a small chapel for its liturgical, pastoral, and social service activities. On Christmas and Easter however, due to space limitations the priest and faithful had to gather under the hot sun to celebrate the Mass and Sacraments. Things needed to change for the parish to continue to fully participate in worship as one community, under one roof.

With the help of the VSO and other donors, the parish completed a 650-person ‘house’ for God in Biro–a milestone for this vibrant Catholic Community. On September 27th, the Feast of St. Vincent de Paul, the pastor, Fr. Stanislaw Deszcz, C.M. led the faithful in the first Mass in the new parish church. In the worshipping Assembly, both priests and the faithful confirmed God’s request to dwell among his people of Biro, Benin.