Hope within the Rubble of War in Syria 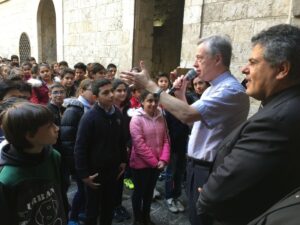 In Damacus, Syria, the Vincentian confreres are known for their house “Couvent des Lazarist,” founded 1783. From the “Couvent des Lazariste,” the Vincentians administer a school, Alfajer Ecole. The war in Syria has greatly and negatively impacted the lives of Christians in the Middle East, especially, by disrupting education. On April 12, 2017, Provincial Superior, Fr. Zaid Haddad described the situation to the VSO: “This year our school welcomes students from sixty families, affected by the war. We struggle because of the lack of resources to support the costs of their education. We also need to support our own students who suffer from lack of resources in these times of war.” The VSO provided a grant to the Vincentian school for the support of the children and families of refugees. Through the generosity of donors, the VSO was able to provide a 20,000 EURO ($23,513 USD) grant to stabilize needy families and facilitate their children’s education. Fr. Khalil Arar, C.M., the project director, reported on the following activities to assist students of Alfajer Ecole and their families: direct economic support to families, purchase of computer equipment, clothing for pupils, school supplies, and scholarships. In total, seventy-five students and their families were helped.

The ministry of the confreres brings a glimmer of hope for Christian refugees by providing important supports for struggling families. The grant aided access to education for those who were forced to abandon study because of war, and provided an incentive for families to remain in their Syrian homeland. Fr. Khalil wrote about the first day of school, “Wednesday September 6 [2017] we began our school year with 330 students…everything was fine except the distant gun shots, and the absence of three teachers who are leaving Syria for Canada as immigrants, I feel bad because of the people’s fear.”

The support of Christian refugees also added a level of stability to the struggling school. Fr. Khalil Arar, C.M. reported that lack Scholarship recipient of security and fear has pushed people to look beyond the boundaries of the homeland for a new beginning. Fr. Khalil wrote to the VSO, “Thank you father for all the work you did for our students to assist them, and they remain in the country with their families.” If families and their children receive this and other kinds of supports, they will be encouraged to rebuild their future from the rubble of war. This project is a small, yet important step in rebuilding peace in Syria.