The Uphill Road to a Quality Catholic Education

The Province of Southern India built hostels for the children of Bapulapadu Mandal in the Krishna district several years ago. The hostels house and feed children from families whose parents want a better future for their children; some are unable to care for them adequately due to chronic illness and poverty. Although the children attended local government schools, the Vincentian missionaries saw that the local schools were failing to properly educate the children. Two important shortcomings were discovered, unqualified teachers and instruction only in the local language. To be successful in India’s modern economy English language fluency is necessary. The Vincentian missionaries determined to solve the problem by building and organizing an English Medium School to deliver quality education to meet the future needs of the children for life and employment in a modern economy. The school would serve both the children in the hostels as well as others living in the forty villages that make up the Vincentian mission.

St. Vincent’s Catholic School in Singanaguldam Village opened in 2017 to about three hundred elementary school children. It serves impoverished and tribal children from all over the rural area. Many inhabitants work in bonded labor and are oppressed by wealthier landowners. With the supports of societal pressure, employers (lenders) force indebted workers (borrowers) to repay debt by low wage labor for long periods of time, even years. The Vincentian school shines a ray of hope for a better life. Even poor parents now have an affordable option for securing a quality education for their talented children.

Highly qualified teachers instruct in English so the children are developing their language competency from an early age. With their language skills they can advance to higher education and gainful employment, freeing them from poverty and the trap of bonded labor.  Additionally, they are taught Catholic values at the school, such as the importance of faith, prayer, equal opportunity for girls, care for the poor, peace and social justice. 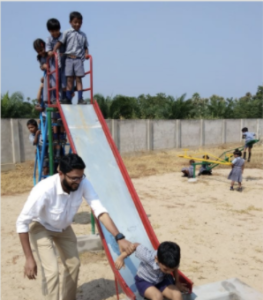 The VSO assisted the Southern Indian Province to secure funding for the project from its conception to recent completion. In the four years of development, the Vincentian missionaries put to use each portion of the building as it was completed, each phase allowing more children to attend. So while the school has been functioning for about two years, the final phase of construction was completed just this summer amid the pandemic shut downs. Because of the government lockdowns due to the COVID 19 virus, the construction workers had to stay at the work site. They were sheltered and fed there by the Province. This allowed the construction to continue throughout the lockdown. Eventually this school will educate six hundred children from age 3 to 15 years old.